Welcome to the website of St. Spyridon Greek Orthodox Cathedral in Worcester, Massachusetts! We are a welcoming community of Christians who come together every Sunday and throughout the week to worship our Lord and God and Savior Jesus Christ, and serve one another. Father Christopher Stamas serves our community at the present time with energy and love. We are located on Russell Street adjacent to Elm Park, the country's oldest public park.

We are an active parish with more than a dozen ministries, a weekly food pantry, weekly services and other activities.

We have recently constructed a new multi-million dollar Family Center. The St. Spyridon Cultural Center is a central meeting place for all Orthodox Christians in Central Massachusetts and although not limited to Orthodox Christians, we hope to have created a mutual meeting place for all to enjoy. Please be sure to visit the Family Center Website to learn more.

If you would like to join us in Sunday Services and become a member of St. Spyridon or would like to arrange a meeting with our clergy, please call the office at 508.791.7326 or speak with any Parish Council Member.

Thank you for visiting our website, we hope that you gained a deeper understanding of our parish. We look forward to welcoming you in person soon!

History of the Church

The community was officially established on October 15, 1914 through a constitution enacted at a meeting hall located at 9 Bartlett Street in Worcester. For the first years Beaver Hall at 69 Grafton Street was used for Church services with meetings held at 9 Bartlett Street, later at 126 Green Street, and still later at the AOH Hall on Trumbull Street. 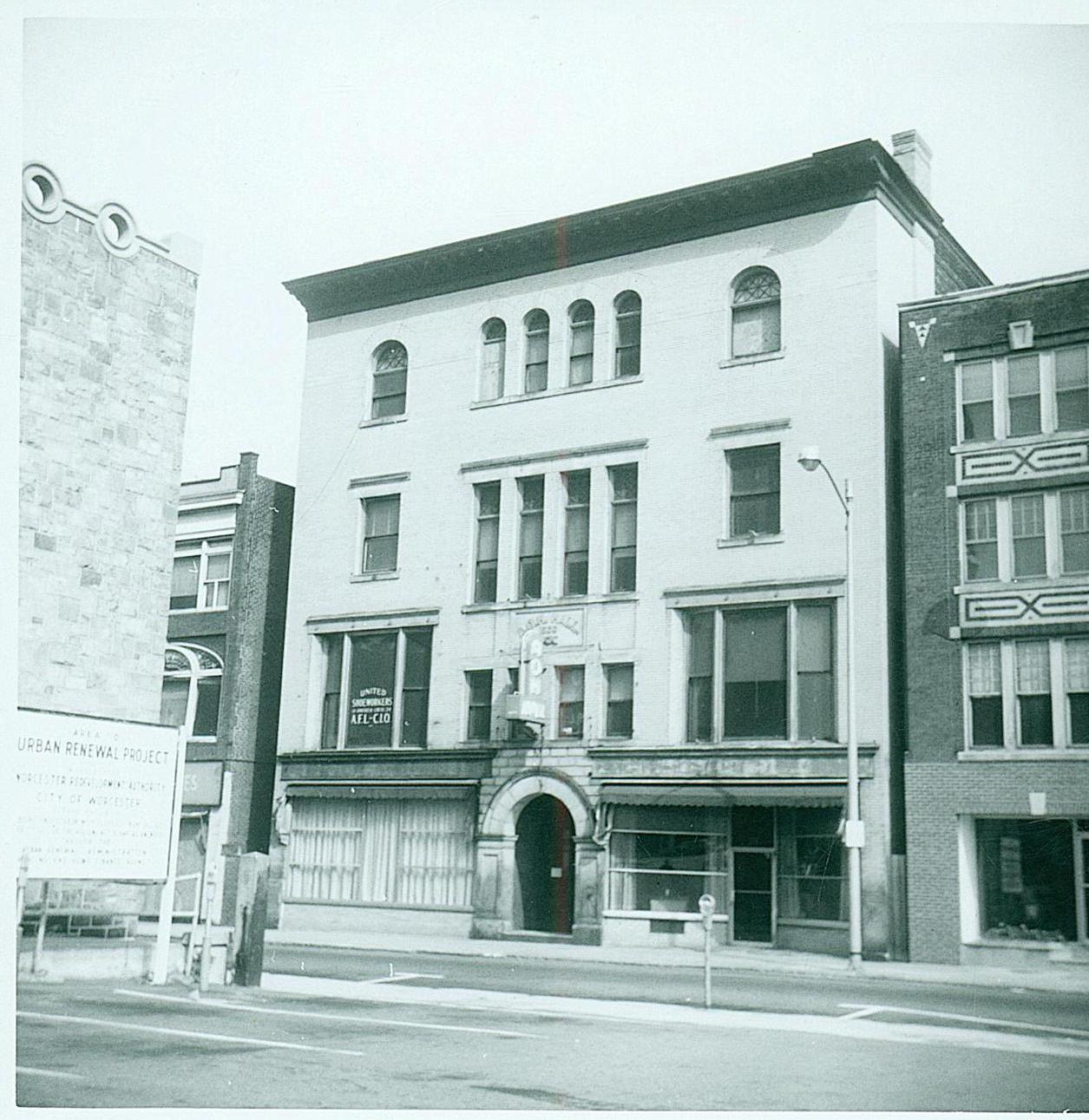 The first Greeks arrived in Worcester in the late 1890’s and early 1900’s, for the most part it was single men who were looking for a better way of life due to political, economic, and religious persecution caused under Ottoman rule and as a result of the many difficulties in pre and post-World War I Europe. By 1914 there were between 3,500-4,000 Greeks in Worcester but only about 25 families; the rest were either bachelors or their families remained in Greece. Once the early arrivals to Worcester had jobs many then returned to Greece, married and returned to Worcester with their families.

The name “St. Spyridon” was chosen for the church for two reasons. Most of the initial Greek Immigrants in Worcester from Epirus in Northwest Greece. Since Corfu, where the body of St. Spyridon is still preserved is located across from Epirus, they named their church in his honor and memory. Also, factories were closed very few days in the early 1900’s, Christmas Day was one of the few days they were closed. Saint Spyridon’s Feast Day under the old calendar fell on Christmas Day and this allowed the first Greek immigrant workers to celebrate their Saint’s Day without the loss of a day’s wage of work.

From 1915 to 1918 the idea to buy a site to build a church was first conceived with the finding of a suitable location entrusted to a Board of Directors. In order to buy land, it was necessary to have the community recognized officially by the state and this was obtained from the Commonwealth of Massachusetts on September 26, 1916. The purposes of the community appearing on the charter submitted were “establishing and maintaining a Greek Church for the worship of God by Greeks and persons of Grecian descent in Worcester and vicinity, according to the dogma and tradition of the Eastern Orthodox Christian Church; and establishing and maintaining a Greek school and a place for reading room, library and lectures.” 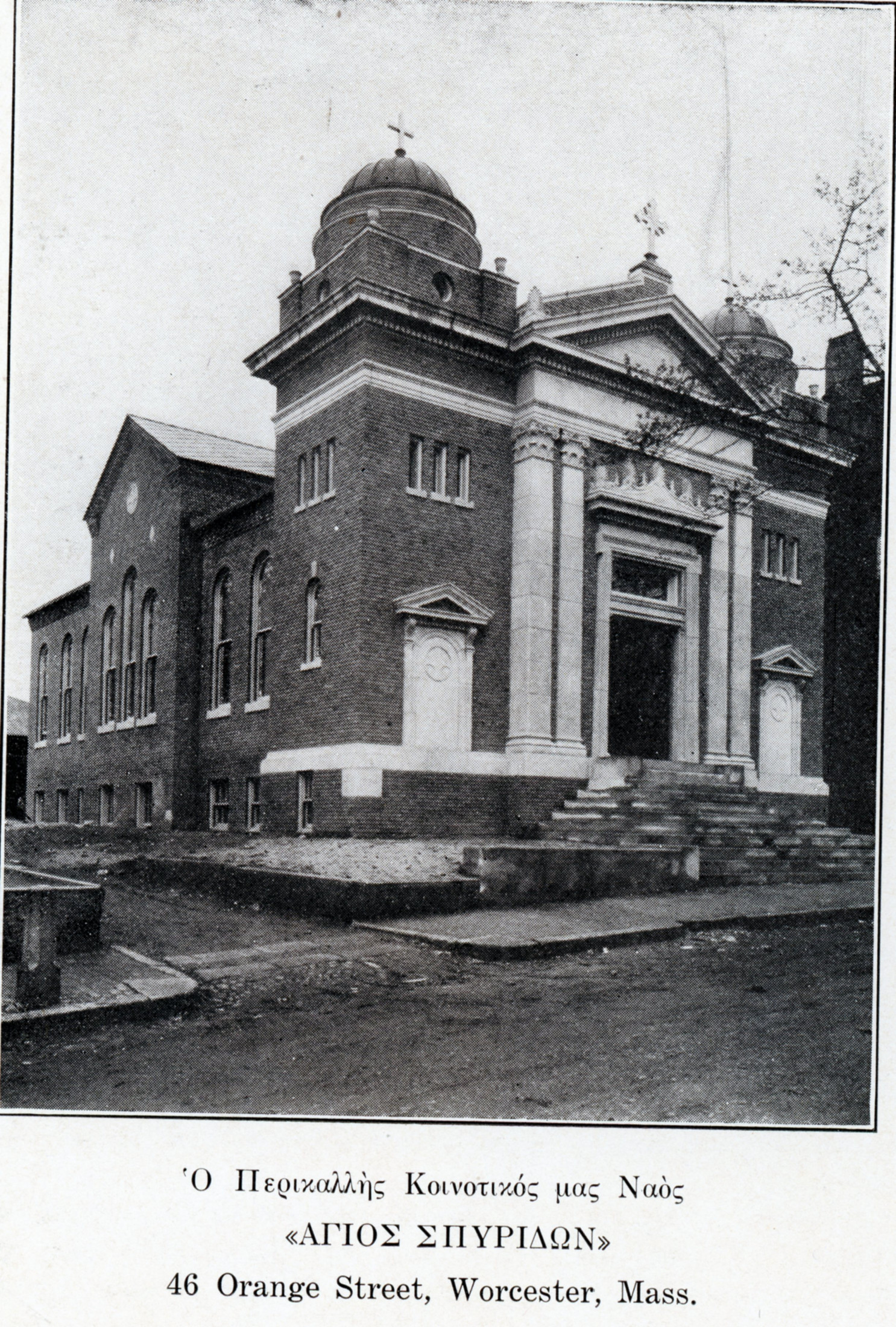 The original choice for a suitable site for the church was Orange Street, though others thought that the plot should be in another section of the city. During these early years there was no regular dues. Instead monies were collected from the community where one cent was paid to the Church for every loaf of bread purchased. A church collector visited the houses and collected the money based upon notes made by the baker. The amount collected for the community totaled as high as$250 to $300 a month using this process. Due to political differences emanating from Greece some members of the community withdrew from the St. Spyridon Community and in March 1917 founded another church under the name of “Sts. Taxiarchai,” with services at Trumbull Street. At the beginning of 1918 many members of St. Spyridon’s community took steps to unite both communities before buying a plot for a church. The decision to buy a plot of land for the erection of a new church was reached in a General Meeting of March 22, 1918 and after considering many different sites it was finally decided to buy land on Orange Street.

At the end of 1918 the Archbishop of Athens sent his assistant to Worcester, who succeeding in bringing the two separate communities together under one name, Saint Spyridon with services held at one location, Trumbull Street. In 1923, with $15,000 borrowed from the Five Cents Savings Bank an Architect was hired, plans developed, and construction began in 1924 for the Saint Spyridon church located on Orange Street. Consecration services were held on May 3, 1925. The construction of the church cost $65,000 with $30,000 held in mortgage.

Political differences which arose from the elections in Greece again brought about the separation of some families from the community and the establishment of another church, “The Assumption of the Virgin Mary” whose members held services at Front Street near Trumbull Street. Fortunately, that separation of the community did not last long with two communities combining into St. Spyridon in 1928. The community quickly began to outgrow the Orange Street site and in the 1940’s many alterations were made in the church. The Sanctuary had to be shortened in order to gain more space in the church; this proved without a doubt that the Community was in need of a larger church. Different committees examined lots and sites until the present lot on Elm, Russell, and Cedar Streets was found for the erection of a new church and other community buildings. After many inquiries, the Russell St. lot was purchased with house and garage for a sum of thirty-five thousand dollars.

The first “Historical” as it is quoted in the minutes, meeting of the Building Fund Committee of Saint Spyridon Greek Orthodox Church was held on Thursday, September 7, 1944, at 8 p.m. at the Coronado Hotel under the chairmanship of Constantine Moschos. The following were in attendance; Charles Kotsilimbas Davis, George Andresen, Angelus Cotsidas, Theodore Tonna, George Tsagarelis, Dennis Tavlas, John Alexander, George Pallas, and John Tsouros. A great enthusiasm ensued for the construction of a new church and a collection was begun with a sum of thirty thousand dollars realized from the above committee members. In November 1946 it was decided in a general meeting of the Community to sell the Orange St. church to the National Polish Catholic Church, with the terms that St. Spyridon continue services at Orange St. until the new church was completed. 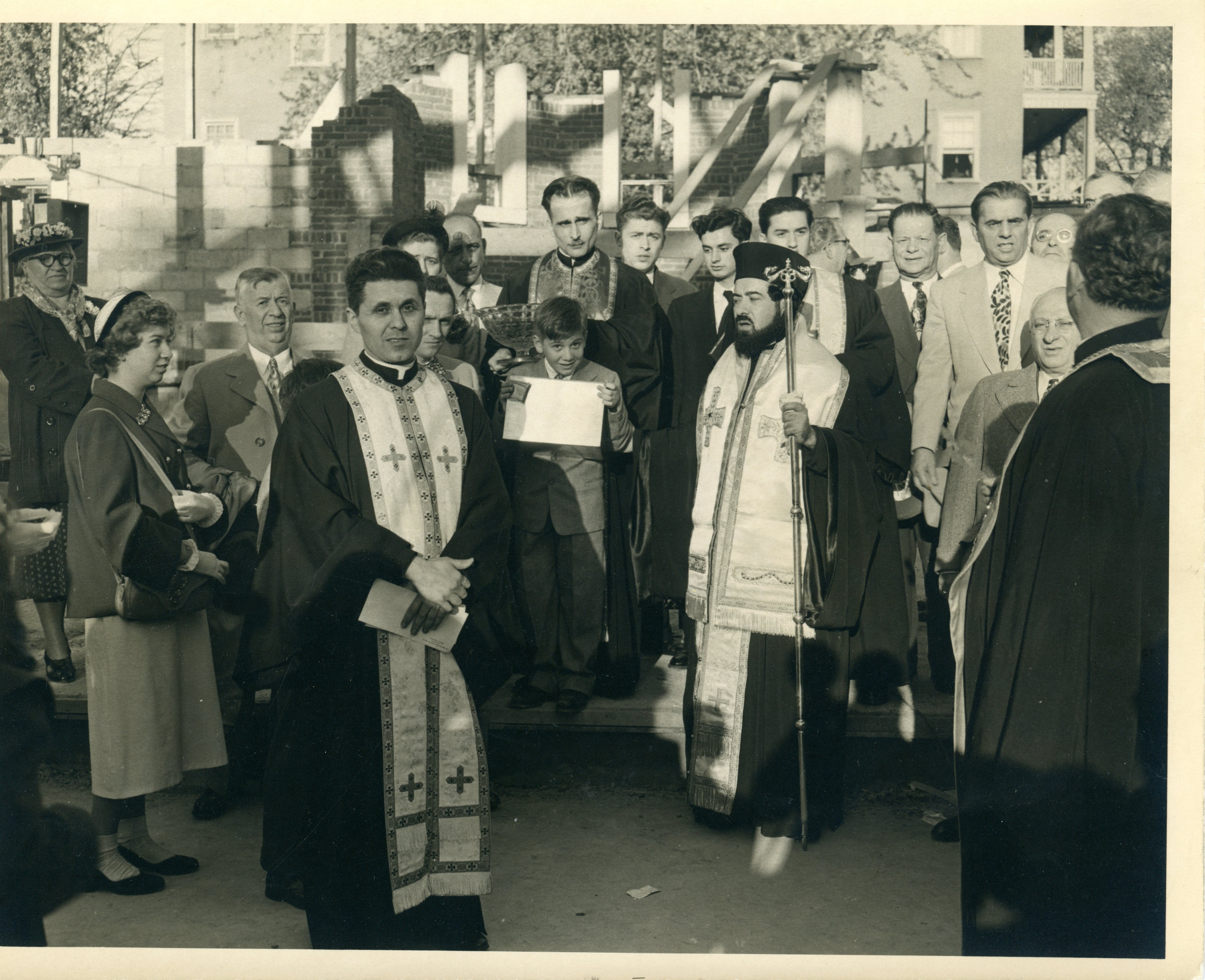 A reorganization of the Building Fund Committee took place in April, 1950 and architects were then called to submit plans. Among them was Christopher P. Kantianis of Springfield, MA. Mr. Kantianis submitted plans for a church with 600 seating capacity plus an auditorium under the main body of the church. The plans were given to contractors for bids, and the R. L. Whipple Company of Worcester submitting the lowest bid was awarded the job. The contract between the Committee members and the Contractors was signed on October 23, 1950, and excavation started immediately. The cornerstone was officially laid on May 13, 1951. The new Saint Spyridon Church on Russell St. was officially opened on April13, 1952 with consecration services on May 30, 1954.

The 1960’s saw the realization of another dream for the founders of the church; classroom and auditorium space for ministries with the erection of a Community Center; Cotsidas Auditorium, Tonna Room, Greek/Sunday School classrooms, and office area. In Sept 1965 the Tonna Room was the sight for the first ecumenical dialogue between the Orthodox and Roman Catholic churches in the United States, led by Archbishop Iakovos of Blessed Memory and Bishop Bernard Flanagan. The 1970’s saw the establishment of the first Ethnic Festival in New England with our Grecian Festival during the bicentennial year of 1976. In 1985 Saint Spyridon Church was elevated to a Cathedral by His Eminence Metropolitan Methodios of Boston. 1994 saw the opening of Holy Trinity Nursing and Rehabilitation Center, through the joint efforts of the twelve Eastern Orthodox Christian Communities in Central Massachusetts. Following in the footsteps of the founders of the church in July 2004, spearheaded by a donation made by the late Charles Kotseas, a new Building Committee was formed whose purpose was to upgrade the Community Center. That work was completed in 2012 with the renovation of the Cultural Center, classrooms, kitchen, rest rooms, entry areas, Cedar St lot, and hall below the Cathedral. 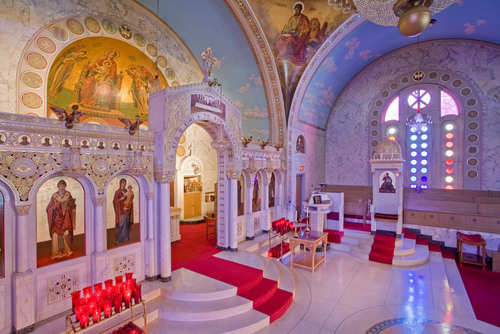 Today our Cathedral is situated in one of the most beautiful settings in the city overlooking Elm Park. The Parish is vibrant and growing with a long list of ministries to include the Orthodox Food Pantry, Philoptochos, GOYA, Little Angels, Seniors, Youth Basketball, Board of Education Certified Pre School, Greek Language School, and Religious Education.

The words expressed at the 1954 consecration to the Parish’s future generations still ring true. “Be worthy of your predecessors. They sacrificed much, so that they might leave a beautiful church for you. Remember them, imitate them, and keep your church and your religion alive in the land of America, their adopted country but your country by right of birth. You have a priceless heritage and treasure in your religion and in the traditions of your forefathers. Benefit spiritually from them. Walk in the way of life with Christ as your guiding light. Perpetuate the old teachings. Enter proudly but with humility into the Temple of God, the Church of Saint Spyridon.”